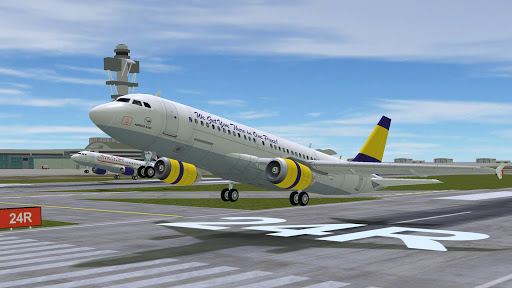 This game was developed by real-world air traffic controllers! It’s designed to be fun and highly realistic.

There is a choice of four different view perspectives: tower view, runway view, sky view, and pilot view. In this version, we include two radar screens: one for airborne traffic and one for ground traffic.

Aircraft flight characteristics are highly realistic. Aircraft actually raise their nose during the takeoff rotation and during the landing flare, just like they do in real life. Part of what makes Airport Madness fun is the high speed at which things happen. In real life, things happen much slower.

For seven years, we’ve been telling game players that Airport Madness is a game, not a simulation. While Airport Madness 3D offers a decent level of realism, we are mainly trying to make this game fun. We are using real earth data for mountains and surrounding landscape, as seen in the images, but our airports were built by us from scratch.

We’ve worked hard to compare our game to that of 3D simulations that are currently for sale elsewhere, and what we feel everybody wants is a game that’s easy to play, is lots of fun, and highly addictive.

Thank you for being a customer!
Minor bug fixes.